IPL T20 2015 22nd Match RR vs RCB Preview, Live Scores: If ever you wanted an example of contrasting fortunes, the clash to held between Rajasthan Royals and Royal Challengers Bangalore on Friday at Ahmedabad definitely is one.

If ever you wanted an example of contrasting fortunes, the clash to held between Rajasthan Royals and Royal Challengers Bangalore on Friday at Ahmedabad definitely is one. In spite of the loss in the last game, Rajasthan are sitting pretty with five wins in six games, and an impressive total of 10 points. Even their only loss against Kings XI Punjab in the last match came in the eliminator. In contrast, Bangalore have been clearly struggling for momentum. Their star players are yet to fire, which is why they suffered three defeats in four games. In the last game against Chennai Super Kings, they actually had to drop Chris Gayle. 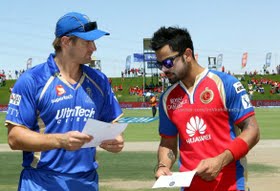 In spite of being the team of the tournament so far, Royals would be disappointed that their winning streak has come to an end. They would now be keen to rebuild all over again. The loss to Kings XI Punjab in a high scoring match was an indication that they aren't actually invincible. Their bowling struggled against Punjab defending a big score, and they would have to pull themselves up. The poor bowling form of James Faulkner would be particularly worrisome. After a great start to the series, his bowling hasn't been up to the mark. Pravin Tambe has been impressive although he hasn't run through sides. The likes of Tim Southee, Dhawal Kulkarni and Chris Morris will have some work to do.

Rajasthan are better of in the batting department. Ajinkya Rahane's great batting form just seems to go on and on. In the last match as well, he batted stupendously. Skipper Shane Watson has returned with a bang, and has strengthened the batting. If only Steven Smith can get back among the runs, they would become further dangerous. Deepak Hooda and Faulkner have made important contributions down the order.

On the other hand, Bangalore have plenty to sort out. In the last match, Manvinder Bisla was brought in for the struggling Gayle, but he couldn't change the team's fortunes. There is every possibility that Bangalore might get Gayle back. Apart from the tall West Indian, Bangalore would also be looking forward to significant contributions from Virat Kohli, AB de Villiers and Rilee Rossouw. Kohli and de Villiers have done reasonably well, but Bangalore need a lot more from them.

The story is pretty much similar for Bangalore in the bowling as well. If you take away Yuzvendra Chahal's performance, no one has really been effective. Mitchell Starc has just come out of injury, and hasn't looked dangerous. Harshal Patel has been easily taken apart while Varun Aaron hasn't really been the player they have needed. Bangalore have tried out the left- arm spin of Iqbal Abdulla as well, but not to much avail. Clearly, Bangalore have a tough task on hand.