New Zealand’s pace bowlers had South Africa in all sorts of strife on the opening day of the first Test at Kingsmead, Durban. Having chosen to bat after winning the toss, the Proteas finished on a disappointing 236 for 8

New Zealand’s pace bowlers had South Africa in all sorts of strife on the opening day of the first Test at Kingsmead, Durban. Having chosen to bat after winning the toss, the Proteas finished on a disappointing 236 for 8, with Trent Boult and Neil Wagner troubling the Proteas for a majority of their overs. Mitchell Santner then came in and had his say as well as there was no respite for the hosts. Hashim Amla was the only batsman to cross the fifty mark, and Temba Bavuma got close. But, it was about frittering away starts for South Africa on the day.

Things were tough for the host batsmen right from the start. The openers Stephen Cook and Dean Elgar were put to the Test by Boult, Wagner and Doug Bracewell. As the ball moved around, the duo tried their best to keep their wicket in tact with safe strokes. The partnership survived until the last ball of the 14th over when Boult, having found his rhythm, got one to come back in, and claimed the edge of Cook. The opener never looked comfortable during his stay at the crease, and his dismissal was the end of his misery. 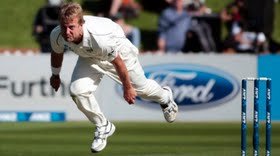 Elgar followed him next. Bracewell from around the wicket drew the batsman into pushing at one outside off stump, and Martin Guptill took the edge at second slip. Amla and JP Duminy, who did not look in any sort of form at all, managed to take the score to 102 for 2. But, once Duminy fell, South Africa quickly precipitated to 160 for 5, and finished the day 236 for 8. Everyone from the top seven got starts, but none converted them into a big score, which hurt South Africa in a big way.

The only time during the day when the hosts looked in any sort of control was when Amla was at the crease, and in full flow. Amla cover drove with the grace associated with him. He got as many as six fours in that region as the Kiwi bowlers looked to stay away from his pads. Had Amla stayed on, things could have been different. But, on 53, Boult delivered an inswinger which Amla could only inside edge to wicket-keeper BJ Walting. Considering what transpired before and after, it could be a key moment in the match.

Bavuma and skipper Faf du Plessis added a steady 54 for the fifth wicket, but again did not carry on. Du Plessis was sent back by Wagner, caught brilliantly, one-handed, by Kane Williamson at gully while Bavuma, who drove and pulled with confidence, was trapped lbw by Santner. Before him, Quinton de Kock had already given an easy catch to cover. Even as bad light brought an early halt to the day’s play, Wagner had enough to send back Vernon Philander with a lifter. Kagiso Rabada and Dale Steyn will have to try and take South Africa closer to 300 for them to finish with a competitive score.