Indian captain MS Dhoni on Wednesday won the toss and elected to bowl first in the third and the final Test match against West Indies at Windsor Park Stadium here.

Harbhajan Singh snapped up his 400th Test wicket and Ishant Sharma took 5/77 as India took control of the third and final Test against the West Indies in yet another rain marred day at Dominica, Rouseau on Thursday.

At stumps on day two, India were 8/0 with openers Abhinav Mukund (6) and Murali Vijay (1) at the crease after a downpour just after tea prevented any further play with the visitors trailing the hosts by just 196 runs with all 10 wickets intact. 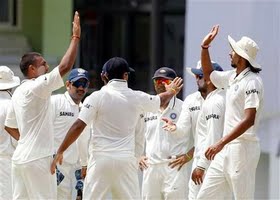 Ishant Sharma got the all important wicket of Darren Bravo after lunch who was out for exactly 50 off 134 balls as the West Indies lost their sixth wicket on the second day of the third and final Test at Dominica, Rouseau on Thursday.

Earlier, the Indian bowlers once again dominated proceedings as the home team went into lunch at 128/5.

Steady rain blighted a promising start under clear skies and bright sunshine in the first ever Test in Dominica - the 106th Test venue - to reduce the opening day to just 31.1 overs. In that time, India made good use of their only opportunity to bowl first this series, removing three top-order batsmen on a good batting track. India's decision to bowl was prompted by the moisture in the pitch, but it didn't play a significant role; instead the seamers were persistent against the inexperienced batting that included two debutants. Shivnarine Chanderpaul and Darren Bravo then added 40 runs in a rebuilding effort before the rain swooped in.

This is a landmark Test in several ways other than the ground's debut: Chanderpaul became the most-capped West Indies Test cricketer, overtaking Courtney Walsh, and he fittingly handed out the maroon caps to his two debutant team-mates, Kieran Powell and Kirk Edwards.

Inclement weather had the final say on day one of the third and final Test between West Indies and India on Wednesday as the hosts finished at 75/3 after Ishant Sharma rattled the opposition early on with a fine spell of new ball bowling.

Persistent rain just after the lunch break forced play to be called off with Darren Bravo and Shivnarine Chanderpaul unbeaten on on 22 and 17 respectively.

Ishant Sharma was in top form yet again for Team India, taking two opposition wickets and Praveen Kumar chipped in with one as the West Indies went into lunch precariously perched at 53/3 on day one of the third Test and final Test at Dominica, Roseau on Wednesday.

Darren Bravo (16) and Shivnarine Chanderpaul (10) led a mini recovery for the hosts putting on 25 runs for the fourth wicket but it was India who called the shots in the first session of play.

Indian captain MS Dhoni on Wednesday won the toss and elected to bowl first in the third and the final Test match against West Indies at Windsor Park Stadium here.

India lead the three match Test series 1-0 and a win or draw here will mean that India are the first team to win both ODI and Test series in West Indies.

Toss: MS Dhoni has won the toss, and in agreement with JD he has chosen to bowl first. Munaf Patel is back from his elbow injury, and is replacing Abhimanyu Mithun. One of the things he mentions is the need to bowl as many overs in the first session when the pitch will be moist. It will also help his side's over-rate, because if his side is found slow there this year, he will be banned from the next match.

Earlier, the West Indies got off to a shaky start when debutant opening batsman Kieran Powell was caught by VVS Laxman in the second slip off the bowling of Praveen Kumar after Indian skipper Mahendra Singh Dhoni won the toss and elected to bowl first.

Powell was out for three and paid the price for fishing outside the off stump early on in his innings.

An Ishant Sharma bouncer down the leg side accounted for opener Adrian Barath who only managed to drag the ball on to his stumps as the West Indies lost their second wicket. Barath made 12 runs off 38 balls.