Aus vs Eng 5th test Ashes Live Scores: Debutant Usman Khawaja briefly lit up a gloomy first day of the fifth Ashes Test on Monday but Australia's batting frailties and rain returned later in the day to leave the hosts wobbling on 134-4 at the close of play.

Sydney: Debutant Usman Khawaja briefly lit up a gloomy first day of the fifth Ashes Test on Monday but Australia's batting frailties and rain returned later in the day to leave the hosts wobbling on 134-4 at the close of play.

Despite all hopes of regaining the Ashes from England having gone, Australia could still square the series with a morale boosting victory at the Sydney Cricket Ground (SCG) this week.

Khawaja, the first Muslim to play for Australia, opened his first Test innings with a stunning salvo but ended it for 37 runs with a looping top-edged sweep off Graeme Swann which Jonathan Trott gathered at square leg just as the rain returned.

Mike Hussey, so often Australia's saviour in this series, was still at the crease on 12 runs with Brad Haddin about to join him when play was stopped for the day.

Haddin's elevation above Steve Smith in the batting order was one of the first manifestations of the captaincy of Michael Clarke, who took charge of his country's Test side for the first time in place of the injured Ricky Ponting.

Clarke had brought Hussey to the crease by firing the ball straight at James Anderson in the gully off the bowling of Tim Bresnan for just four runs after the first rain delay, which swallowed up the tea break.

The 29-year-old, greeted with cheers from his home Sydney crowd and boos from the English contingent when he walked out to bat, was clearly furious with himself for another failure in a series where he has averaged just 19 runs in eight innings.

Khawaja came in straight after a lunch break precipitated by the fall of opener Phillip Hughes, who wasted a good morning's work with a sloppy shot to be caught at slip by Paul Collingwood off the bowling of Chris Tremlett for 31.

The 24-year-old Pakistan-born Khawaja, the first Australian to debut at number three since Justin Langer in 1993, had been forced to wait for his chance but grasped it with both hands when it came courtesy of Ponting's injury.

In a clear statement of intent, he sent the first ball he faced racing away for two runs before summoning up a beautiful pull shot at chest height to dispatch the second for four.

Eight balls into his Test career, he had made 15 runs and although he then settled into the more conservative pace of his team mates, the 43,561 crowd at the SCG was buzzing.

Opener Shane Watson had epitomised the cautious approach, waiting 89 deliveries for his first boundary and taking more than three hours to put on 45 before he hit a Bresnan ball he should have left and was caught in the slips by Andrew Strauss.

The England skipper had decided to stick with the team that retained the Ashes with an innings and 157 run victory in Melbourne last week and his bowlers largely repaid his faith in them.

Clarke won the toss and elected to bat, as Ponting would undoubtedly have done, but put his own stamp on the captaincy by not doling out the baggy green caps to the debutants.

Khawaja received his from former captain and Test opener Mark Taylor, while Shane Warne did the honours for the other debutant, his fellow spinner and former club mate Michael Beer. 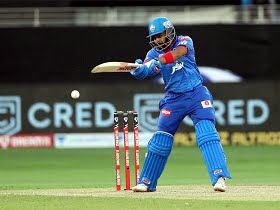