Outgoing national coach WaqarYounis will have to undergo a rehabilitation programme in Australia for around five months to treat his health problems which forced him to step down as Pakistan coach.
Sources close to the former Test captain said that Waqar's decision to resign as coach and end his tenure after the Pakistan team's tour to Zimbabwe was solely because of his health issue. 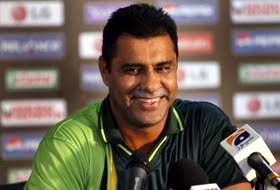 "He is facing some liver problem and specialists in his now adopted hometown, Sydney have advised him to start an immediate treatment/rehabilitation programme to prevent the health problem from turning into a more serious disease," one source said.
"Waqar only learnt that he will require to undergo the rehabilitation programme after coming to Pakistan to prepare the team for the Zimbabwe tour because the results of the tests he underwent before coming to Pakistan only came out earlier this month after which he informed the PCB about his personal and health problem," the source said.
He said PCB Chairman Ijaz Butt didn't want Waqar to go and the former Test pacer has assured the board that once he is 100 per cent well he will be available for Pakistan cricket again.
"Don't rule out the possibility of Waqar returning as coach sometime next year or even being given another top responsibility by the board as even while resigning Waqar made it clear he wanted to serve Pakistan cricket in any capacity," the source said.
The source said the possibility of the board appointing a coach on interim basis until Waqar is well again is also a strong possibility and for the time being AaqibJaved, who served as assistant coach with Waqar, might be the interim choice.
There have been speculations that Waqar's resignation might be related to some problems with the board but the sources close to him denied this and said the pace bowler had faced lot of pressure from his family and doctors to return to Australia immediately and start his treatment.
"But because of the PCB requesting him to at atleast carry on for the Zimbabwe tour he agreed and he will return to Pakistan with the team to collect his belongings and sort out all matters with the board before returning to Sydney to start his rehabilitation program," one source added.

The 39-year-old former Test captain has won a lot of praise and appreciation from former players and greats, who felt Waqar did a good job rebuilding the Pakistan team despite the several controversies and scandals that Pakistan cricket had to undergo since last year.