NSW vs T&T CLT20: NSW Blues win in super over

Moises Henriques turned out to be the unlikely hero for New South Wales Blues (NSW) as the 2009 champions edged out Trinidad and Tobago (T&T) in the super over in their Champions League Twenty20 Group A clash on Wednesday. 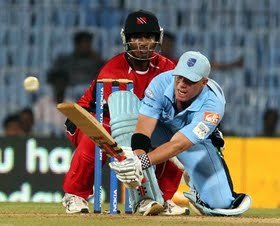 MoisesHenriques turned out to be the unlikely hero for New South Wales Blues (NSW) as the 2009 champions edged out Trinidad and Tobago (T&T) in the super over in their Champions League Twenty20 Group A clash on Wednesday.

With 17 runs required for a win off the last over of the match, Henriques struck three fours as NSW finished with 139/8 in reply to T&T's total of 139/6.

Henriques once again starred for the Blues, this time around in the super over as he struck the last four balls bowled by Ravi Rampaul for boundaries.

Needing 19 runs of their super over bowled by Steve O'Keefe, T&T fell four runs short of their target as Lendl Simmons was caught by David Warner at the long-off boundary off the last ball.

Opting to bat, Simmons (41 off 39 balls) along with Adrian Barath put on 41 runs before left-arm spinner O'Keefe provided the breakthrough by getting the latter bowled in the seventh over.

Barath hit three fours for his 15 runs, which came off as many balls.

Darren Bravo (6) did not last long as he was shown the door by Moises Henriques for the addition of just 13 runs.

Bowling the 12th over, Henriques dealt the Caribbean outfit another blow when he had the well-settled Simmons trapped in front with the T&T total reading 69.

NSW seemed to be at the top of their game having removed the top three in the T&T line-up, but Daren Ganga and Dinesh Ramdin stabilised the innings with a 37-run partnership for the fourth wicket.

Both Ganga and Ramdin however failed to make use of the starts, getting out for 21 and 19 respectively.

While Ganga struck one four and a six, Ramdin found the fence three times.

That T&T managed to reach 139 from 112 for five in the 18th over, was due to some sensible batting by Kevon Cooper and Ravi Rampaul.

While Cooper scored 12 off nine, Rampaul used the willow effectively to eke out a quickfire 15 off seven deliveries with the help of two boundaries.

Henriques was the most successful of the NSW bowlers, finishing with figures of two for 27 in 4 overs, while Pat Simmons, Mitchell Starc and O'Keefe chipped in with a wicket each.