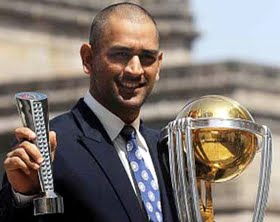 1. India's World Cup win: India waited for 28 years before the most cherished dream of the cricket fans became a reality. After Kapil Dev's heroes, it was Dhoni's men in blue who won the World Cup. With this win, Sachin Tendulkar's only dream came true but it took him six World Cups realize it.

2. Virender Sehwag's double ton: He is not called as a clone of Sachin Tendulkar for nothing. What seemed impossible for anyone to do except Tendulkar, Sehwag did it with ease. Last year, Sachin blasted an unbeaten 200 runs against South Africa in Gwalior. Sehwag chose another Madhya Pradesh city, Indore, to break his idol's record. He slapped boundaries and sixes to torment the West Indies like never before.

3. England's Ashes win in Australia after 24 years: England's dominance was more profoundly announced when they claimed their first Ashes series in Australia after 24 years, with their third innings victory over the home team in the final Sydney Test. England clinched the series 3-1, leaving the Aussies red faced as this was the only Ashes series where a team won three Tests by an innings margin.

4. Zimbabwe make a Test return after a six-year exile: Problems have always marred Zimbabwe and the cricket played in the nation - however, even with all their unresolved issues, they have made a successful return to Test cricket after a 6 year ban. Zimbabwe marked their return from the exile by racking up an impressive 264 for two against Bangladesh on the first day of a one-off Test at the Harare Sports Club and went on to win the match on Day 5 by 130 runs.

1. Spot-fixing verdict: Pakistani cricketers Salman Butt, Pakistan's long standing problems with match-fixing allegations continued this year. A London court convicted Pakistani players Salman Butt (30 months), Mohammed Amir (6 months) and Mohammed Asif (12 months) on spot-fixing charges on November 3 for bowling deliberate no balls in a 2010 match against England. The players are said to have received between 2,500 to 65,000 pounds in bribes. All three have been handed jail terms, but may get off with serving just half their sentences depending on good behavior.

2. Demise of Tiger Pataudi: On September 2011, India lost its captain who led them to the first ever overseas win. The lung infection he was diagnosed with led to a respiratory failure which in turn led to cardiac arrest. He was 70 years old.

3. Yuvraj Singh's ailment: Indian cricket fans were in for a bomb when Yuvraj Singh's mother announced that her son was battling non-malignant tumour. India's man of the tournament in the ICC World Cup, Yuvraj is an essential part of team and his absence was felt in the team while he was recuperating. In a country that considers its cricketers no lesser than God, it was heartbreaking. The dashing southpaw however revealed that he has defeated the disease and will be back in action by February 2012.

4. Shoaib taking on Sachin in his autobiography: Controversially Yours, that's the name of former Pakistan pacer Shoaib Akhtar's autobiography. And as the name suggests, it did stir a storm when Akhtar claimed that Sachin was scared of facing him. As a result, his book launch in many Indian cities were cancelled.

5. Vinod Kambli's fixing claims: Former India cricketer tried digging old graves but failed to succeed. In a dramatic and tearful revelation on a news channel, Kambli suggested that the 1996 World Cup semi-final match against Sri Lanka might have been fixed He said that something was fishy in the match. Truth or was it just a publicity gimmick? Whatever it was, it did sadden some fans while most chose to ignore before it snowballed into a big controversy.