ENG vs NZ 1st ODI Preview, Live Scores: The five-match one-day series against New Zealand will be England's first one-day assignment since their disastrous exit from the 2015 World Cup in the first round.

The five-match one-day series against New Zealand will be England's first one-day assignment since their disastrous exit from the 2015 World Cup in the first round. In spite of the fact that they featured in the tri-series Down Under prior to the World Cup, they failed to beat a single Test nation in the tournament that matters the most. They were thrashed by New Zealand, Australia and Sri Lanka, and hit a new low, when they went down to Bangladesh in their last group match, which meant they were out of the tournament in the first round itself. It may be pertinent to note that Bangladesh had beaten them in the 2011 edition as well. 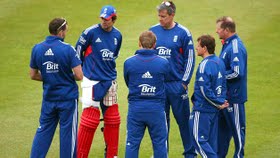 In the aftermath of the World Cup debacle, England have decided to make some serious changes to the squad, and the move to look beyond the oldies is a step in the right direction. The decision to drop Alastair Cook as captain and player just before the World Cup was a much delayed one. But, the axe handed out to veterans like James Anderson, Stuart Broad and Ian Bell for the New Zealand series is a step in the right direction. These three men have done a lot of good for England in the one-day format as well. But, they were liabilities to the side in the 2015 edition and, clearly, the time has come to look beyond them.

While England cannot expect overnight changes in their fortunes, they will be hopeful of ushering in a productive era under Eoin Morgan, with fresh and raring to go youngsters. Wicket-keeper Jos Buttler has been one of the biggest plusses for England in recent times. His aggressive batting has given the team an edge like never before. England would have high hopes from him as they head into the series against New Zealand with the Edgbaston game. The performance of other youngsters like Alex Hales and leg-spinner Adil Rashid will also be keenly followed.

Unlike the Tests, New Zealand would definitely go into the one-day series as favourites. They are, after all, the World Cup runners up, and if you take away their performance in the final, they were unassailable. New Zealand also hold a significant edge over the Englishmen since they comprehensively beat them in their World Cup encounter. Tim Southee shred them into pieces claiming seven wickets after which Brendon McCullum added insult to injury with a spectacular display of brutal hitting. The Kiwis would be keen to reopen these wounds for England.

New Zealand's confidence would have been further bolstered by their performance in the practice game. Grant Elliott, who has become immortal in New Zealand cricket having hit Dale Steyn for that famous six, made a hundred in the warm-up game. Luke Ronchi, who had a memorable Test debut recently also hit a ton in the same match. Then, there was Mitchell McClenaghan, a member of the Mumbai Indians' IPL-winning outfit, who claimed four wickets. McCullum will obviously be expected to continue his exploits. The Englishmen thus could be in for a tough time.