India Vs England in T20s: A statistical look

Having been undone in the Tests, India would be keen to get some positives out of the T20s against England. As India hunt for their winning formula, here’s a statistical look at India versus England T20 clashes.

Having been undone in the Tests, India would be keen to get some positives out of the T20s against England. As India hunt for their winning formula, here’s a statistical look at India versus England T20 clashes.

India and England have faced each other in five matches till date, out of which England have won three and India two. The first T20 match between the two sides was played at Durban as part of the inaugural T20 World Cup in 2007. India won that high-scoring game by 18 runs. The latest clash between the two sides also took place at the T20 World Cup, this time in Sri Lanka in September this year. That game, held at Colombo, was also won by India, by a massive margin of 90 runs. In between the two teams clashed at Lord’s, Manchester and Kolkata, with England winning all three. The Lord’s game was a close affair, with England getting home by three runs. The other two matches ended in easy wins for the Englishmen – six wickets each. 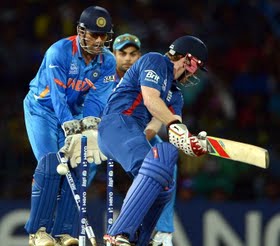 For India, Gautam Gambhir has scored the most runs in T20s against England. In three games, he has scored 129 runs at an average of 43, with one half-century. For England, Kevin Pietersen is the leading run-scorer. In four games, he has notched up 171 runs at an average of 42.75 with one fifty. The highest score by an Indian against the Englishmen is the 68 Virender Sehwag made at Durban in September 2007. As for England, the 53 by Pietersen registered at Kolkata in October 2011 is the best till date. Flamboyant left-hander Yuvraj Singh has hit nine sixes in India-England clashes, the most by an Indian. From the English side, Pietersen holds the record for most sixes with five.

Shifting focus to the bowling part, Harbhajan Singh has been the most successful bowler in India-England T20s. He has snared eight wickets in three matches at an amazing average of 9.62. For England, Steven Finn’s five wickets in two games at the average of 11 is the best record so far. Harbhajan holds the record for the best figures by an Indian in a T20 game against England courtesy his 4 for 12 Colombo earlier this year. Jade Dernbach’s 4 for 22 at Manchester in August 2011 are the best figures by an Englishmen against India.