India’s skill level is high, but we will get better by final: Sarfraz Ahmed

Pakistan’s skipper Sarfraz Ahmed has admitted that India have better skills after losing to the arch-rivals second time in the Asia Cup. Pakistan went into the Asia Cup as the favourites having won the Champions Trophy.

“Their skill-level is high, ours is not quite there, but by the final, we will get better. It’s a do-or-die match for us in the next game, we will do well,” Sarfraz said at the post match ceremony after losing to India by nine wickets. 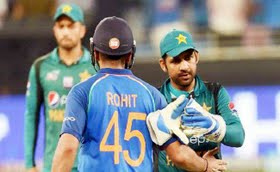 Ahmed admitted that the team’s fielding also made matters worse for Pakistan. “We made it tough for ourselves by dropping those catches. We were 20-25 runs short and if we would have held on to our catches we could have possibly made things interesting.

“The wicket was a bit difficult to play on in the afternoon as the cracks had widened up. It wasn’t easy for a new batsman walking in. Had we got early wickets, this chase would have been certainly difficult. We have been losing a lot of wickets in the early overs and hence it becomes difficult to recover from such situations,” explained the Pakistan skipper.

Pakistan now take on Bangladesh on Wednesday for a place in the final.