Chandimal describes India loss as worst of his career

Following the 0-3 loss to India, Sri Lanka skipper Dinesh Chandimal on Monday described the defeat as the worst of his career.

Following the 0-3 loss to India, Sri Lanka skipper Dinesh Chandimal on Monday described the defeat as the worst of his career. Sri Lanka were bowled out for 181 in their second innings after managing only 135 in the first. Sri Lanka lost the Pallekele Test by an innings and 171 runs.

"This was the toughest series in my career, no doubt. The reason being that we were not able to take the games to five days. There have been four day Tests and three day Tests. This is the worst series ever. It's pretty tough for the team and me. Credit goes to India," Chandimal was quoted as saying in a PTI report. 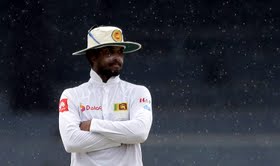 Not giving any excuse for the defeat, he added, "They have played outstandingly well in the series. I am disappointed that if we could have dragged the game to the fifth day we could have learned something, but losing within two and half days you cannot give any excuses.”

"As captain, I would like to take the responsibility. The fans have always supported us. They encourage us always. Today we saw despite losing, people applauding us. That is what the team needs now.

"We cannot let the players be mentally down. We are doing the process right. We might not get results soon, but we are confident that the future looks good," he further said.

On repeated batting failures of the team, he said, "During training, we are doing a lot of hard work. We had some gameplan and we spoke so many things during the game. As a player when you have to go to the middle you have to put them to practice. That was what the batsmen were unable to do. As players we had to stand up and do our performances well.”

"As an opener you should at least bat for 15 to 20 overs. As I said, we gave some game plan to each and every player. They have to execute them when in the middle. We failed to do that in the series and that cost us dearly I would say," he went on to say.