England have called up Middlesex seamer Steven Finn as bowling cover for the second npower Test against India at Trent Bridge.

England have called up Middlesex seamer as bowling cover for the second npower Test against India at Trent Bridge. 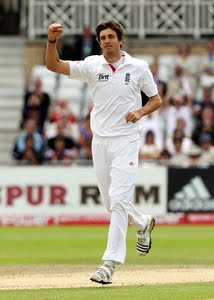 The 22-year-old has joined the squad with doubts surrounding the fitness of fellow pace bowler Chris Tremlett.

Tremlett tested his hamstring “niggle” for a second time during England’s net session this afternoon and captain Andrew Strauss appeared optimistic he would figure tomorrow.

However, Finn, who returned 5-33 for his county in a Clydesdale Bank 40 match against Derbyshire tonight, has now been summoned and will be available for selection along with Yorkshire all-rounder Tim Bresnan, England’s 12th man at Lord’s.

Whoever is tasked with trying to bowl out India twice for the second time in as many weeks, Strauss is under no illusions that success will not come easy.

“I think they’re going to come back hard at us. Their record certainly backs that up.

“We did a lot of things right at Lord’s. We had to work very hard for that victory - and we’ve got to be prepared to do all that hard work again.”

England will be doing so in high-profile circumstances, after an opening Test which caught the public mood and resulted in an enthralled full house at HQ three days ago.

“It was fantastic to see those scenes on the fifth day at Lord’s,” said Strauss.

“It’s fantastic that a lot of people are talking about cricket.

“For us as international cricketers it gives you that buzz and it makes you feel like what you’re doing is important and somehow helping the game of cricket to flourish in the future as well.

“It’s a good spur for us. It shows the added interest when maybe the number one team is at stake, but also between India and England.

“It feels like the main event of the summer, and our responsibility as players is to make sure it lives up to that hype.”