The top order of Kolkata Knight Riders was in ruins against Mumbai Indians in the Eliminator clash of IPL-4 at the Wankhede stadium on Wednesday.

Harbhajan Singh smashed Shakib Al Hasan for a six in the last over of the match as Mumbai Indians won the IPL-4 Eliminator against Kolkata Knight Riders by four wickets at the Wankhede stadium on Wednesday.

Mumbai will now lock horns with Royal Challengers Bangalore on Friday in qualifier-II, the winner of which will take on defending champions Chennai Super Kings in the summit clash on Saturday.

Shakib Al Hasan was bowled by Lasith Malinga as Kolkata Knight Riders lost their 6th wicket against the Mumbai Indians in the Eliminator clash of IPL-4 at the Wankhede stadium.

The top order of Kolkata Knight Riders was in ruins against Mumbai Indians in the Eliminator clash of IPL-4 at the Wankhede stadium.

WHO WILL WIN MI VS KKR ELIMINATOR MATCH?

It will be the end of the road for the loser of the match whereas the victors will take on Royal Challengers Bangalore in the second qualifier on Friday for a place in the finals. 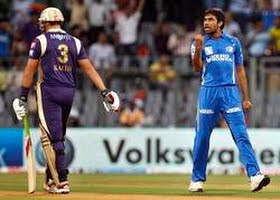 The Chennai Super Kings have already qualified for the summit clash by winning a close one against the Royal Challengers on Thursday.

The winner of the Mumbai, Kolkata tie will also be assured of a place in the 2011 Champions League T20 competition to be held in India.

RCB and the Super Kings have already qualified for CL T20 later this year by virtue of their top two finishes in the points table.

The Mumbai Indians who came back from the dead to win Sunday's clash against the Knight Riders at Kolkata will aiming for a repeat performance in their own backyard this time around. 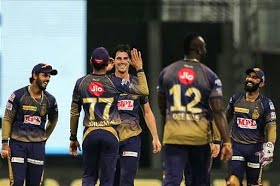