India lost their third wicket after lunch as Abhinav Mukund fell to Devendra Bishoo after a well made 62 on day three of the third and final Test against the West Indies at Dominica, Roseau on Friday. Mukund was caught at forward short leg by Adrian Barath. 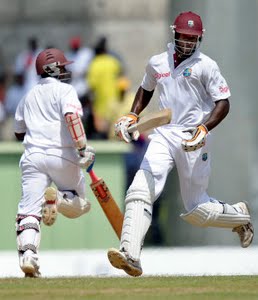 A stubborn partnership of 65 runs between ShivnarineChanderpaul who went on to score his 23rd Test century and Fidel Edwards, batting at number 10, enabled the West Indies to get out of jail and force a draw on day five of the third and final Test against India on Sunday.

However, it was Mahendra Singh Dhoni's men who went away with the spoils as India followed up their 3-2 victory in the one day international (ODI) series, with a 1-0 result in the Test series owing to their 63 run win at Kingston, Jamaica in the first match.

By doing so India created history by triumphing in both formats of the game for the very first time in the Caribbean.

Chasing a victory target of 180 in 49 overs, Edwards trapped AbhinavMukund leg before wicket off the very first ball after the hosts were dismissed for 322 in their second innings.

India went into tea at 19/1, still requiring another 161 runs in the last session to wrap up the series 2-0.

India edged a day of fluctuating fortunes to take complete control of a rain-marred third Test in Dominica and closed in on a 2-0 series victory despite a century on debut from Kirk Edwards. His confidence and composure while approaching his landmark was a contrast to his edginess and uncertainty early in his innings, and he was guided along by ShivnarineChanderpaul, who fought his own battles and survived to take the game into the fifth day. However, the loss of three wickets in the final session, made possible by an improved spell from Harbhajan Singh, meant the game was still India's.

The hosts lost their third wicket after lunch when Darren Bravo's attempt to hit Harbhajan Singh out of the ground only went as far as Praveen Kumar at the wide mid-off region who took a comfortable catch.

Bravo made 14 and was involved in a 30 run partnership with Chanderpaul.

Solid contributions from the middle and lower order propelled India to 308/6 at stumps on day three of the third and final Test against the West Indies at Dominica, Roseau on Friday.

Skipper Mahendra Singh Dhoni on 65 and Harbhajan Singh on 12 were the not out batsmen at the crease as the visitors took a healthy lead of 104 with four first innings wickets still in hand.

India lost their third wicket after lunch as AbhinavMukund fell to DevendraBishoo after a well made 62 on day three of the third and final Test against the West Indies at Dominica, Roseau on Friday. Mukund was caught at forward short leg by Adrian Barath.

Earlier, Mukund brought up his maiden Test fifty, and was involved in an unbeaten partnership of 84 runs with VVSLaxman for the third wicket, as India played themselves into a healthy position of 102/2 at lunch.

Mukund was unbeaten on 52 and Laxman was giving him company on 30 as the visitors trailed the Windies by just 102 runs with eight wickets in hand at the end of the first session.

Earlier, carrying on from their overnight score of 8/0, India were delivered a couple of early blows by the home team as they lost the wickets of Murali Vijay and RahulDravid.

Vijay played at a delivery leaving him slightly only to be caught by Windieswicketkeeper Carlton Baugh off the bowling of Fidel Edwards after scoring just five.

A huge gap between Dravid's bat and pad led to his dismissal as the 'Wall' was bowled by West Indian skipper Darren Sammy. He too made just five before making his way back to the pavilion.

Mukund and Laxman then took charge and denied the opposition any further wickets as India chipped away steadily at West Indies' first innings total of 204.

Earlier on day two, Harbhajan Singh snapped up his 400th Test wicket and Ishant Sharma took 5/77 as India bowled out the hosts for a measly total.