Having begun the tour with four consecutive losses, India have now won two in a row in Australia, albeit across different formats. The Indian batting and bowling came together for the first time in the series as the visitors trounced the hosts by 37 runs. Having been sent in by Aaron Finch, India put up an impressive 188 for the loss of three wickets. Virat Kohli continued his magnificent form in Australia, with an unbeaten 90 from 55. With the ball, Jasprit Bumrah starred with three wickets while both the spinners Ravichandran Ashwin and Ravindra Jadeja chipped in with a couple of wickets while keeping things tight.

Chasing 189, Australia were in a fantastic position as they reached 89 for 1 in the ninth over. But, this is when Steven Smith was dismissed, miscuing a stroke of Jadeja. He was caught in the covers by Kohli for 21, and Australia stumbled from that point. 89 for 2 soon became 89 for 3 as Ashwin, returning to the attack, after getting some stick initially, went round the wicket and trapped Finch leg before for 44, a delivery after a vociferous appeal for the same was turned down. At the other end, Jadeja had his second when he had Travis Head lbw for 2.

The momentum was now firmly with India, and then did not let it slip. Shane Watson, who was terrific with the ball, top edged a sweep off Ashwin behind the stumps. Australia had lost half their side for 110, and there was no way back. Apart from the spinners, Jasprit Bumrah also had a brilliant T20 debut. He broke the promising opening partnership, by having David Warner caught at mid-on. Bumrah kept things extremely tight, and was rewarded with two more wickets. Hardik Pandya had a horror debut, sending down five wides in his first over that cost 19. But, he recovered to finish with a couple of scalps. 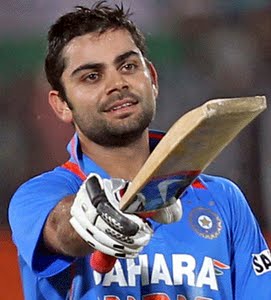 Earlier, Kohli was in magnificent form again with the bat as India posted an imposing total. He peppered the field with ease en route to his unbeaten 90, going down the pitch to the spinners, and hitting them over the top. Against the pacers, he used his range to great extent, with the wrist coming into play whenever Kohli wanted to place the ball away from the fielders. Australia had recalled Shaun Tait for his game, but he found the going extremely tough against a rampant Kohli. While Kohli was brilliant, India were aided by another brisk start from Rohit Sharma, who perished for a 31, looking for big runs.

Rohit’s dismissal, caught at mid-on off Watson’s bowling, was immediately followed by that of Shikhar Dhawan, who was undone by a slow bouncer by Watson in the same over. Kohli, however, kept the runs coming, even as Suresh Raina struggled to get the big hits on comeback. He managed to launch James Faulkner into the stands towards the end, but perished soon after, getting tangled for 41 from 34, looking to paddle the same bowler. Under pressure, MS Dhoni launched one into the stands right away, in the last over. It was perhaps an omen that this was India’s day.