Over the last couple of months, South Africa have suffered some shocking defeats in Tests. Two of the key reasons behind the same have been the failures of Dale Steyn and, to an extent AB de Villiers -- the latter's benchmark of

Over the last couple of months, South Africa have suffered some shocking defeats in Tests. Two of the key reasons behind the same have been the failures of Dale Steyn and, to an extent AB de Villiers -- the latter's benchmark of success is on an altogether different scale considering what he has achieved consistently over the years. Against that backdrop, the triumph at Centurion becomes highly significant. Yet again, Steyn was out of the reckoning due to injury while de Villiers' contribution in the match was zilch, quite literally as he registered ducks in both innings. Yet, the South Africans thumped England by an impressive margin, proving that things are not that bad for them after all. 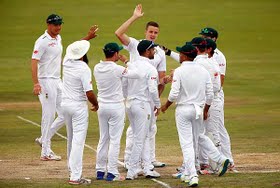 The standout effort in the match undoubtedly came from upcoming talent, fast bowler Kagiso Rabada. He was all over the Englishmen with both his pace and movement, and his 13 wickets in the game were clearly the major difference between the two sides. Remember, South Africa went into the match having lost the series. Also, while the experienced Morne Morkel was competent, he hadn't demonstrated the capability to run through attacks. In contrast, Rabada went into the match having claimed a five-for in the defeat at Johannesburg. It definitely gave him a lift as he ran through the English batting line-up, which should have been high on confidence.
Even as Rabada was the standout performer for South Africa in the match, their batting effort was equally striking. As many as three South African batsmen got hundreds in the first innings, which set up the hosts for a big total. Opening has been a major worry for South Africa for a while now. Hence, they would be extremely pleased with debutant Stephen Cook coming good right away with a century on debut. The Proteas will do well if Dean Elgar can show more consistency. Hashim Amla was back to his best, almost scoring two hundreds in the match, and holding the innings together. The comeback of Quinton de Kock also made a difference as he also chipped in with a hundred.
Although England won the series, they should be extremely disappointed with the manner in which they capitulated at Centurion. With no pressure, they should have looked to dominate. Instead, their batsmen floundered and, not for the first time, England were tamed in an inconsequential game. Their batsmen were hugely disappointing, with none of them reaching three figures in the first innings in spite of Alastair Cook, Joe Root and Moeen Ali all crossing their respective half-centuries. They fared even worse in the second, with not one of them getting to 30, as the entire unit capitulated under pressure.
England's bowling also could not match their efforts of the previous Test. Stuart Broad made an impact again, and was among the wickets too, but did not do as much to trouble the South Africans. James Anderson also picked up a few scalps, but he never really looked a threat to the hosts. Ben Stokes did pick up a few wickets in the first innings, but those came too late in the day. Also for Chris Woakes, he proved to be rather pedestrian while Moeen was efficient at best. The England loss at Centurion is a decent indication that the gulf between the two sides is not as wide as earlier thought to be.
-- By A Cricket Analyst