Sunrisers Hyderabad would be faced with a stiff challenge when they take on former champions and table-toppers Chennai Super Kings in an IPL match here on Wednesday. Sunrisers have 14 points from 11 matches and a win tomorrow would take them closer to a berth in the IPL semifinals. The Chennai Super Kings, who have won the title twice before, are at the top of the points table despite a humiliating defeat at the hands of Mumbai Indians in their previous match. After winning a record-equalling seven matches in a row, CSK endured a miserable outing in Mumbai where Mahendra Singh Dhoni`s men were sent packing for a paltry 80, which was the season`s lowest team total. 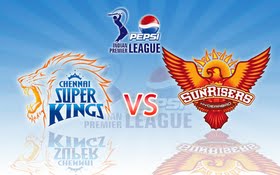