3rd ODI may well decide this series as Zimbabwe remain 2 games up over Bangladesh in a very one sided series. This series for Zimbabwe has so far got good results including the discovery of young talent like Vitori who has taken 2 wicket hauls. Sibanda has also been good with the bat while Bangladesh have been the opposite. 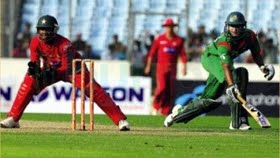 The 3rd ODI may well decide this series as Zimbabwe remain 2 games up over Bangladesh in a very one sided series. This series for Zimbabwe has so far got good results including the discovery of young talent like Vitori who has taken 2 wicket hauls. Sibanda has also been good with the bat while Bangladesh have been the opposite.

How the Teams Stand:

Zimbabwe by far have been the competative team in this series and they will be given the chance in the 3rd ODI to seal this series with the trophy. They have totally shocked not only Bangladesh but those who are cricket fans as they were defintley the underdogs before this series. Everyone from Zimbabwe has basically contributed something but the 2 stars so far for Zimbabwe in the ODI series is the young Vitori and opener Sibanda. Vitori wasn’t thought to be a good bowler by TaminIqbal but Vitori has been showing what he can do with the ball with 10 wickets conceding 50 runs. VisiSibanda has been fantastic with the bat as he has been backing up Vitori’s bowling. He has 2 half centuries to his name which includes a high score of 96 in his 163 runs from the first 2 matches. In each match so far their has been at least 1 more other batsman to build a partnership with Sibanda and this series has been a highlight in Zimbabwe’s international career.

Their is no other word to describe Bangladesh at the moment and that is “poor”. They have been poor in all matches so far this series just as they looked like getting somewhere in international cricket but this setback will cost them. Their has been a lot of words said by Bangladesh players one being Iqbal who was too cocky and look where that has gotten him this series. Iqbal is one of the senior players that Bangladesh needs to perform and he has only managed 7 runs being dismissed by Vitori twice. RubelHossain has been the best bowler for the away team as he has taken 4 wickets but that hasn’t been enough for Bangladesh. Shakib al Hasan and Rahim have been the most impressive out of the Bangladesh side but also the debutant from last match NasirHossain managed a good half century and he may turn the series around.

Their should be no reason for Zimbabwe to make any changes to the XI that has played this series.

Bangladesh would have to be worried about their batting and Kayes, Iqbal, Ashraful and Nafees haven’t scored too many runs and maybe Siddique may replace one of the four.