India will be overwhelming favourites to clinch the five match one day international (ODI) series when they take on the West Indies at Antigua's Sir Vivian Richards Stadium on Saturday.

India will be overwhelming favourites to clinch the five match one day international (ODI) series when they take on the West Indies at Antigua's Sir Vivian Richards Stadium on Saturday.

Leading 2-0 after back to back victories at Port of Spain, things seem to have fallen into place right from the word go for Suresh Raina and his boys. 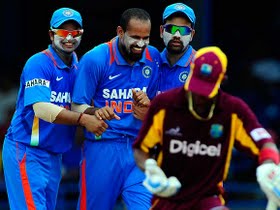 If it was the bowlers who did the trick in the opening fixture, the batsmen came to the party the second time around in a rain-curtailed affair as West Indies' total of 240/9 failed to pose much of a challenge for the visitors.

The revised target of 183 from 37 overs was chased down with 3.2 overs to spare and with seven wickets in hand as Team India continued their unbeaten run on their first assignment as world champions.

The men in blue had earlier triumphed in the only Twenty20 clash by 16 runs to get the tour off to the perfect start.

The sensational Virat Kohli made up for his failure in the first game with a classy innings of 81 which led to the India's victory in the second ODI.

Parthiv Patel who continues to struggle behind the stumps seems to fare far better at the top of the order and contributed 56 useful runs which set the platform for Team India's successful chase.

West Indies on the other hand don't have much to write home about apart for the half centuries struck by Lendl Simmons and Ramnaresh Sarwan which provided their bowlers with something to bowl at on Wednesday.

They seem to be totally at sea with what they are being confronted with and will have to pull up their socks to be considered a genuine threat for the remainder of the series.

But they have a mountain to climb, especially, as they are once again deprived of the services of big-hitting Chris Gayle. The former West Indies captain was overlooked again by selectors on Thursday when the squad was announced for Saturday's third ODI.

There are two changes to the Windies squad that was selected for the first two ODIs.

Dwayne Bravo's request to be rested has been granted with Jamaica's Danza Hyatt, who played in the only Twenty20 against India, selected in his place.

Fast bowler Ravi Rampaul has also been rested for the Antigua leg of the five-match series, which comprises the third and the fourth ODIs. Kemar Roach has returned to the squad to replace Rampaul.

Likely XIs of both teams: