Mahela Jayawardene stroked an elegant 144 to propel Sri Lanka to a 69-run win over England as the tourists levelled the one-day series 1-1 at Headingley on Friday.

Mahela Jayawardene stroked an elegant 144 to propel Sri Lanka to a 69-run win over England as the tourists levelled the one-day series 1-1 at Headingley on Friday. 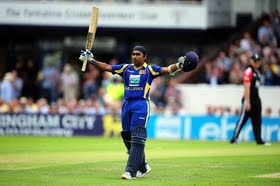 Jayawardene hit his highest ODI score off 150 balls as Sri Lanka piled on the runs on a batsman-friendly wicket to finish on 309 for five.

England initially threatened to chase down the daunting target while Eoin Morgan smashed a 37-ball half-century but, after he was out for 52, they struggled to find any momentum and were all out for 240 with more than four overs to spare.

"This was a very good response from the boys -- 310 was a bonus, we thought 270 would be a good total," man-of-the-match Jayawardene told reporters in Leeds.

"It was important for us to get back into the series after that first game."

But once Jayawardene and Kumar Sangakkara came together there was little the England bowlers could do to stem the flow of runs.

The duo added 159 for the third wicket - a record for Sri Lanka against England -- before Sangakkara was dragged out of his crease by Graeme Swann and stumped for 69 in the 39th over.

Jayawardene kept exposing the gaps to keep the scoreboard ticking over until he too was stumped off Swann after crafting his 15th ODI century.

His knock included 14 boundaries but his exit failed to improve England's fortunes as Angelo Mathews smacked the ball around the ground for 46 not out in 30 balls before Nuwan Kulasekara and Jeevan Mendis carried the total past 300.

"Once Kumar and I settled we managed to up the rate. We knew the initial 15 to 20 overs were crucial and once the ball got older we could attack certain bowlers," said Jayawardene.

England captain Alastair Cook's decision to chase on a good batting wicket initially paid off as he and Craig Kieswetter scored 53 without loss.

However, the daunting run rate soon caught up with them and the hosts began to lose regular wickets.

Kieswetter was out when he smashed a Suranga Lakmal bouncer to deep square leg on 25.

Cook (48) followed him back to the pavilion after driving Suraj Randiv to wide long-on while Kevin Pietersen (13) was brilliantly caught on the long-on boundary by a diving Lasith Malinga off Mendis.

The usually reliable Jonathan Trott (39) was totally outfoxed by an inswinging yorker from Lakmal which flattened his middle stump.

Morgan tried to revive fortunes with a patient knock but with England falling behind the required run rate, the home team knew their chances of victory were all but over when he departed in the 37th over.

The third game in the five-match series is at Lord's on Sunday.