Monty Panesar must mend his way to revive career

In a big blow to England left-arm spinner Monty Panesar, he has lost his contract with Surrey following the ugly urinating incident in a night clubsome days ago.

In a big blow to England left-arm spinner Monty Panesar, he has lost his contract with Surrey following the ugly urinating incident in a night club some days ago. The development is the latest in the series of setbacks the Indian-origin cricketer has suffered in a stop start international career which began so promisingly back in the year 2006. For a couple of years after debut, Panesar was the lead spinner in the team before off-spinner Graeme Swann made a surprisingly stunning comeback, and has since been the team’s premier spinner.

Panesar is now 31, and he must soon begin to realise that time is running out for him if he doesn’t mend his ways. There is no doubt that Panesar has the talent to succeed at the international stage. The most recent evidence of the same was seen during England’s visit to India late last year when he claimed 11 wickets at Mumbai to bowl England to a brilliant victory. Panesar was instrumental in England’s historic series triumph over India as he bamboozled the Indian batsmen, who were supposed to be great players of spin, but failed to keep out Panesar. 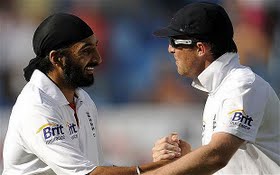 When Panesar made his debut, he impressed most people around the world, with his bowling as well as his attitude. He picked up wickets regularly in most Tests, and was always at the batsmen. Even when not grabbing wickets, he looked threatening owing to his attacking approach to bowling. His figures reflected his success in his initial years – 40 wickets in 2006 at 33, 41 wickets in 2007 at 32 and 39 wickets at 33 in 2008. Although these weren’t massively brilliant figures, it was a clear indication of his talent, and what he could offer in the years to come.

The real test of a player comes when after his initial success he has to reinvent himself. This is where Panesar, just like Sri Lanka’s Ajantha Mendis, struggled. Once the opposition batsmen got used to his style of bowling, they started playing him with ease. And, Panesar had no Plan B to unsettle the opposition. His bowling went from decent to pedestrian and poor. In 2009, he featured in only four Tests and managed to pick up only six wickets at a horrible average of 65 before being dumped from the side. He was out of the side for the next two years.

Panesar came back with a bang last year, grabbing 33 wickets in six Tests with four five-wicket hauls at an excellent average of 26. It was supposed to be his second coming, but unfortunately proved to be a false alarm. He was back to his disappointing ways, and has claimed only 5 wickets in three Tests so far at an atrocious average of 70. His latest transgression hasn’t helped matters. Panesar is also going through a personal turmoil with his divorce taking place. It remains to be seen how he fights back from this setback.