The Delhi Capitals put up impressive performances in both the innings to challenge the opposition, but fluent Mumbai batsmen chased down 157 without much fuss with skipper Rohit leading the way with 68(51) and Kishan staying till the end with 33*(19). With this win, the Mumbai Indians became just the second team to defend the title after the Chennai Super Kings

Shreyas Iyer won the toss and backed his team’s strength of defending by choosing to have a bowl first. That decision nearly proved to be disastrous as they lost three wickets in no time, yet again. Previous match hero Stoinis was dismissed by a Boult beauty first ball and Rahane was strangled down the leg side two overs later. Dhawan, who had survived two close calls off Bumrah, was bowled by Jayant Yadav in the fourth over.

Reduced to 25-3 inside four overs, DC were staring at another paltry total, only this time Iyer and Pant, their supposed batting mainstays, finally came to the party. Iyer looked to play his shots early on as he struck two fours against Boult and followed it up with another one against Coulter-Nile. Then came a few quiet overs, though the pair continued to rotate the strike well. In the 10th over, Rishabh Pant got a move on with a couple of vintage sixes against Krunal Pandya. Iyer too got into the act with a six against Pollard, but it was Pant who was getting into some much required form. He smashed two fours against Coulter-Nile to bring up a fifty, his first of this season. 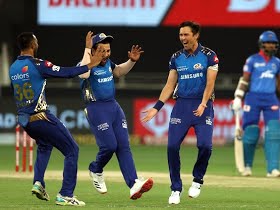 Pant was dismissed two balls later, and with his wicket, DC’s scoring rate too dropped. They could manage only 38 runs from their last five overs, as Iyer was running short of partners. Hetmyer and Patel went without doing much as the onus fell on Iyer to get his side to a fighting total. The DC skipper got to his fifty but blew hot and cold in the final overs as DC finished at 156-7, at least 20 short of what they would have anticipated at the halfway mark.

The momentum had shifted to MI’s camp in the last five overs, and the openers made sure to build on it. Rohit attacked Ashwin with a six in the very first over, and de Kock smoked his countryman Rabada for 18 runs in the second over. Soon after, MI raced to 45-0 in four overs, and it was Stoinis who broke the stand with the wicket of de Kock. Suryakumar Yadav started with a bang by hitting a four and a six in his first two balls.

After that, a few quiet overs followed as DC were trying to strangle MI with their spinners. The required rate was nearing 8 runs per over, and Rohit responded to that with a couple of sixes against the leggie Dubey. In the 11th over, a big mixup between the pair led to a runout, with Suryakumar Yadav sacrificing his wicket to allow the skipper to be there in the middle. Rohit made sure that the sacrifice didn’t go to waste as he struck three fours in the next two overs, also bringing up his fifty in the process.

Only 41 were required from the last six overs, and Kishan made sure the required rate never got higher. Axar Patel and Ashwin had finished their quota economically by giving just 16 and 28 respectively, though they failed to pick up any wickets. Rohit was caught brilliantly at deep mid wicket by substitute fielder Lalit Yadav and Pollard played on against Rabada. The equation then was just 10 runs from 17 balls, and Delhi were never going to come back from that. Hardik too got out with just a single required, and Krunal hit the winning run in presence of Kishan as Mumbai successfully defended their IPL crown. Scorecard