Sri Lanka will face a massive challenge in their first ever outing as they take on New Zealand at the Sophia Gardens in Cardiff on Saturday.

The warm-up matches gave a clear indication of how the teams are currently performing. New Zealand got the better of India without much trouble before being thrashed by the might of West Indies batting. Sri Lanka, on the other hand, were comprehensively beaten by South Africa as well as Australia. 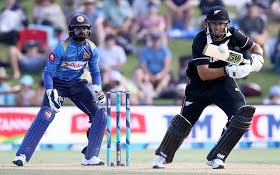 New Zealand have been forever World Cup underdogs but in 2015 they played a fearless brand of cricket under Brendon McCullum, which ironically also led to their undoing in the final. This time, under Kane Williamson, will be looking to go all the way.

One of the biggest positives for New Zealand this time is the form of Ross Taylor who has been sensational over the last couple of years. Williamson himself is a key member of the batting outfit while Martin Guptill, who has the highest score in World Cups, is the other dangerman in the team when it comes to batting.

The bowling outfit will once again be led by the dynamic duo of Trent Boult and Tim Southee, who have been the torch-bearers of New Zealand bowling for a few years now. Ish Sodhi will handle the spin department even as Jimmy Neesham, Mitchell Santner and Colin de Grandhomme will be in charge of all-round services.

Sri Lanka, in contrast, have a lot of question marks to start with. They have sprung a massive surprise not just recalling Dimuth Karunaratne to the ODI side but promoting him to captaincy straightaway. This new look Sri Lankan outfit will have a big challenge to deal with strong opponents and conditions.

It will be imperative for Lanka's experienced players to stand up and deliver. Angelo Mathews may no longer be the captain but he still has a lot to offer with the bat while Lasith Malinga, even in his swansong, is positively looking for a third World Cup hat-trick. To make a mark though they will have to display significantly better cricketing skills than they have done in the recent years.