SA in Semis after D/L tie with WI

The virtual Quarter-Final between South Africa and West Indies survived a rain abandonment threat to end up in an unexpected tie. South Africa who were stunned by the D/L Method to exit from the 2003 World Cup at home had their fortunes reversed at Cardiff.

The virtual Quarter-Final between South Africa and West Indies survived a rain abandonment threat to end up in an unexpected tie. South Africa who were stunned by the D/L Method to exit from the 2003 World Cup at home had their fortunes reversed at Cardiff. The same D/L Method which doomed them 10 years back came to their rescue at Cardiff to help them qualify for the Semi Finals on virtue of their superior net run rate over Windies. 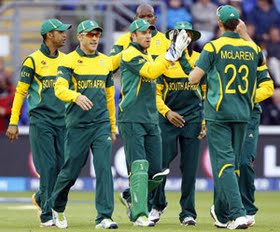 It was one bad shot that was the turning point of the match as a well set Kieron Pollard threw his wicket away with rain in the air. Had WI not lost Pollard at that stage when rain had the last laugh, they would have needed only 187 for 5 in 26.1 overs. But Pollard’s wicket made the D/L par score at 190 for 6 and West Indies had only equaled it which was one run short of a victory.

The match finally got underway after a massive delay. It was supposed to be a 36-over game when toss did take place but a subsequent shower further curtailed it to 31 overs per side. South Africa put in to bat first got a solid opening stand of 80 for 1 in 12.1 overs. Colin Ingram played a special knock of 73 from 63 balls with 6 fours and 2 sixes. Skipper AB de Villiers with a 26-ball 37 and David Miller with a 29-ball 38 helped the Proteas finish with a strong total of 230 for 6.

The West Indian run chase began under overcast conditions and looked promising before losing the all-important wicket of Chris Gayle at 75 for 2 in 11.5 overs. Gayle cracked 36 from 27 balls before the extra bounce from Chris Morris defeated him. After his exit, West Indies relied on Marlon Samuels and the Jamaican played an explosive knock and with Pollard had the game in control while the rain seemed inevitable.

Samuels after a hard-hitting 48 from 36 balls with 6 fours and 2 sixes got bowled by Steyn to leave Windies at 162 for 5 in the 24th over. Pollard (28 from 23 balls) departed at the start of the 27th over when his big hit was caught at thirdman and play never resumed after that because of a heavy shower to leave West Indies heartbroken. Colin Ingram got the Man of the Match award.

Toss and Teams: West Indies have won the toss and asked South Africa to bat first in a 36-over curtailed affair at Cardiff. Windies have made two changes with Devon Smith and Tino Best replacing Ramnaresh Sarwan and a sick Kemar Roach. For South Africa, Dale Steyn gets to play and making way for him is Aaron Phangiso.

Rain Update: The crunch Group B Match between South Africa and West Indies at the Sophia Gardens in Cardiff looks to be a non-starter because of poor weather conditions. The winner of this match will be the second semi-finalist from this group after India. But if the match ends up as a no result, then South Africa will go through to the Semis because of a superior net run rate.