Sri Lankan team has a good opportunity to move ahead of India into the second place in the ICC ODI Championship table if it could win the upcoming five-match ODI series against England comprehensively.

Sri Lankan team has a good opportunity to move ahead of India into the second place in the ICC ODI Championship table if it could win the upcoming five-match ODI series against England comprehensively. 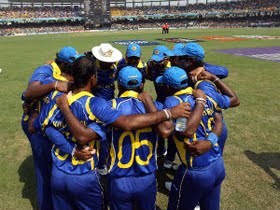 England, however, will remain in fifth position, irrespective of the outcome of the One-day series, which starts at The Oval on Tuesday.

Sri Lanka trail second-placed India by just one rating point and would be able to take sole position of second place if it wins the series 4-1 or better.

A 3-2 series result will put it at par with India on 119 ratings points but Tillakaratne Dilshan's side will be placed behind Mahendra Singh Dhoni's team when the ratings are calculated beyond the decimal point.

Meanwhile, a 5-0 series win for English team will put it along side Sri Lanka on 112 ratings points but behind the Asian side by a fraction, while 5-0 series loss will drop it to 102 ratings points -- just two ahead of sixth-placed Pakistan.

Sri Lanka have two of their batsmen inside the top 10 of the ICC Player Rankings for ODI batsmen with Dilshan in third place and Kumar Sangakkara in fifth position with just eight ratings points separating the two.

Jonathan Trott is the highest-ranked England batsman in the rankings chart -- placed at eighth position and as he is still in his qualification period, he can potentially move further up the ladder depending how he performs in the series.

Trott trails seventh-ranked Virat Kohli by one ratings point while he is just 24 ratings points behind Dilshan.

A batsman qualifies for full rating after he has had a minimum of 40 started innings. Trott has batted in each of the 25 ODIs he has played to date in which he has scored 1,280 runs at an average of just under 55.

Sri Lankan cricketing legend Sanath Jayasuriya, who will retire after the first ODI at The Oval, is currently in 56th and 109th in batting and bowling positions, respectively.

Jayasuriya first topped the batting chart in September 2002 after scoring a match-winning 102 not out against Pakistan in the ICC Champions Trophy opener in Colombo.

His highest bowling ranking was 22nd that he achieved against New Zealand in the second quarter-final of the ICC Knock-Out Tournament in Dhaka in October 1998.

Jayasuriya's highest batting rating of 841 points, which he achieved against Bangladesh in February 2003, puts him in 24th position on the all-time best-ever ODI championship rating list.

In the ICC Players Rankings for ODI bowlers, England's Graeme Swann is the highest-ranked cricketer from either side in fourth position while two Sri Lanka bowlers in Ajantha Mendis and Nuwan Kulasekara figures inside the top 10 in ninth and 10th positions, respectively.