India’s World Cup-winning all-rounder Madan Lal feels India have an advantage over New Zealand following their series win in Australia. He, however, admitted that New Zealand will be tough to beat at home and that India cannot take them lightly.

India will be playing five ODIs and three T20s in New Zealand starting from January 23 in Napier. 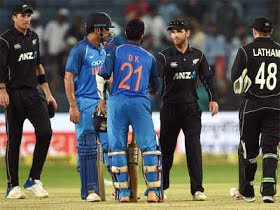 "New Zealand is a tough side. I think they will give a tough fight to India because they have a very balanced team and also have experienced players in the side. It will be better for India to face a tougher team ahead of the World Cup.

“When you play matches against these teams, it only benefits the team. They have a quality batting line-up and their bowling attack is also very good," Madal Lal told Sports Tak.

"I think, it will be advantage India in New Zealand. They will be confident after beating Australia in their own backyard. We have also given them tough fight in the last few India-New Zealand series. But we can not take them lightly," he added.

India's last tour of New Zealand was in 2013-14. They had a torrid time as they succumbed to a 0-4 defeat in the five-match series.