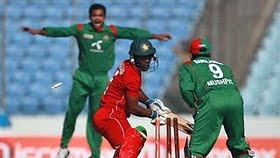 Visiting Bangladesh will play their first ODI of the UCB five-match ODI series against hosts Zimbabwe at the Harare Sports Club ground on Friday.

Despite a disappointing performance in the only Test against Zimbabwe in Harare, Bangladesh will take to the field on Friday recalling the sweet memories of their last five-match ODI series against Zimbabwe on home soil.

In that ODI series, Bangladesh notched a 3-1 victory over visiting Zimbabwe in December last.

Bangladesh can also think themselves as favourite in the ODI series as the visitors recorded highest number of ODI victories against Zimbabwe.

Since 1997, Bangladesh played 51 ODI matches against Zimbabwe with 28 wins and 23 losses.

In the last ODI encounter between the two sides, Bangladesh beat Zimbabwe by six wickets at the Zahur Ahmed Chowdhury Stadium in Chittagong in December last year.

The Bengal Tigers will play their second and third ODIs against Zimbabwe on August 14 and 16 at the Harare Sports Club ground, and the fourth and fifth ODIs on August 19 and 21 at Bulawayo.

The Tigers opened their Zimbabwe campaign with a frustrating 130-run defeat to the home side in their come back Test that concluded on August 8 at the same venue.