According to latest reports from England, Pakistan’s left-handed pacer Wahab Riaz will be staying at Kent as confirmed by the authorities of the County side. 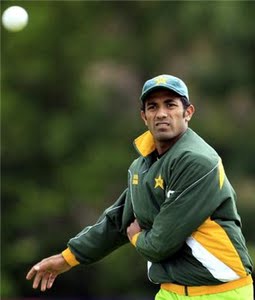 According to latest reports from England, Pakistan’s left-handed pacer Wahab Riaz will be staying at Kent as confirmed by the authorities of the County side.

The pacer has been a tremendous success for the Kent side as he has shown commendable form with the ball, making life a living hell for his opponents. The pacer has taken 14 wickets in the Friends Life T20 which also includes a hat-trick.

Speaking on Wahab’s stint in the side, Paul Farbrace, Kent’s director cricket said, “He will stay now and play and that’s good for him as well because he is keen to learn as much as he can and play some four-day cricket. It will also be good for us to have him in the side because he is obviously an explosive cricketer. His pace is fantastic.”

Earlier, Riaz was expected to leave the County side to take part in the inaugural Sri Lankan Premier League (SLPL); however, with the cancelation of the Sri Lankan League, Wahab will now be staying at Kent in a bid to perfect his technique by playing under English conditions.

Farbrace, while speaking on the SLPL, said, “I don’t think the Sri Lanka Premier League was ever going to happen, there seems to have been too many issues for that to have ever got off the ground.”

According to sources, the pacer will now stay with the English County side till early August; however, later that same month he will depart for national duty as Pakistan will be taking on Zimbabwe in two Test matches and three One-Day games.

Nevertheless, Kent had lined-up South Africa’s medium pacer Charl Langeveldt as Wahab’s replacement, in case he had departed for the SLPL.

Riaz broke into international cricket for Pakistan on 02 February, 2008, when he played his first One Day International (ODI) for his country against Zimbabwe at Sheikhupura. He has appeared in 22 limited over games for the home side, while in the five-day contest, he made his debut on 18 August, 2010, against England at the Oval.

Riaz was exceptionally impressive in the semi-final of the ICC World Cup 2011, where he bowled splendidly against arch rivals India after having a slow tournament.

Earlier, in the mega event the pacer failed to cause any problems for the opposition and soon became a punching bag for critics who questioned his place in the national squad, nonetheless, the pacer gave a befitting reply to them by annihilating the Indian batsmen after taking five wickets in the most crucial game of the tournament; however, the green shirts failed to break the jinx of never winning a game against India in the World Cup as they lost for the fourth time this year.

In the absence of banned pacer Mohammad Amir, Riaz has certainly become the main strike bowler for Pakistan alongside Umar Gul.